new concept for the conversion of the bees to small cells

Yet another plan on how to proceed in order to work with small cell bees  for both beginners and professionals, without the need for treatments against Varroa etc., has been conceived In Celle
Erik Österlund has assured his cooperation in terms of guiding assistance. I am forwarding him all our projects, in the course of their formation, so as he can share his experience. 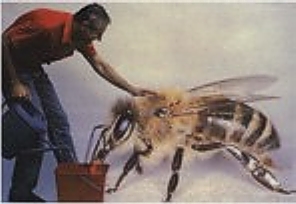 How do we get to this migration, or else, how do the mites of the neighbors with large cell bees get into our colonies?
Because the small cell bees actively defend themselves against the mites through hygienic behavior and the Varroa mainly focuses on the drone brood amongst the small cell bees, we naturally have far less infections compared to the large cell bees.
This is improving continuously if we stick to the guidelines.
As the bees do however exchange amongst nearby colonies, even over longer distances, we will need to constantly count on infections coming from large cell colonies, because there the proliferation of the mites is moving much faster.
Then there is the problem of small Varroa swarms who move out of the crumbling colonies and, while indeed being attacked by our bees and prevented from entering, the mites are still able to get inside.
Adding to this are the complications with robbery.
The result is that our small celled colonies are more challenged and need to clean out more mites. But while cleaning out the mites they are often forced to erode their own larvae’s to get to the hidden Varroa mites in the capped brood. This way they weaken and it becomes clear:
The stronger the reinfection, the lower are the chances of survival.
For this reason we do of course propose to look for placements as far away as possible from other bees. But those are often very difficult to find.

Another complication arises here which affects both the beginner as well as the professional.
This is the fact that this far no one has learned to deal with bees which defend themselves on their own, without the help of treatments against mites.
This means we have to study the behavior of these bees to recognize early signs of possible crises in order to intervene and save them. The hygienic behavior always appears, but usually too late and the bees have to at first learn to defend themselves early enough. Erik assumes 5 years and I think we can reduce this pretty well by working with nucs.
To start with small cells in areas with a high density of bees is quite desolate.
Therefore we have to move into areas of low density. And where are less conventional bees? Wherever there are areas of lesser nectar flow.
We also had to do this in the beginning in order to have a greater chance of success.
But can the bees develop in such, not flowless but reduced nectar flow areas?
Difficult, but the problem of reinfection remains within limits.

And how can we compensate for this deficiency?
By simply simultaneously working with conventional hives and keeping those in areas of rich blossom. Thus, we can rely on those colonies for honey if we need it for our small celled colonies, and even if we need bee material.
The small celled can deliver well-built honeycombs in 4.9 mm in size, which are built much better in the areas with little nectar flow. With those honeycombs and the large celled bees we can create nucs and this way expand the number of small cell hives.

But how do we handle the large cell colonies?
As nearly all of them can draw 5.1 mm foundations, because the real turning point is the step from 5.1 to 4.9, we will run our large cell bees  on 5.1 mm, which is already a good step.
Then we treat them every 2 to 3 weeks with icing sugar and can therefore keep the Varroa mites on a level. Due to the counting of the mites  during the icing sugar treatments we are always up to date if we have a larger reinfections from outside.

We carry on with the large celled ones in the way we have always done, in case of emergency  with Thymol treatment. I would in any case refuse oxalic acid and other chemicals, because those are time bombs.

But where are locations with little nectar flow, because where there is little blossom means there are few beekeepers.
We discussed and found the option of forest areas with clearings where blackberries etc., are found. In this case you’ll be required to find solutions. They exist, perhaps a little further away, but there you will successfully be able to make your experiences with small cell bees.

But how do we carry on at a later stage?

The idea is that we keep finding more beekeepers within our surrounding who will come onboard  and over time we will find areas where there will hardly be left any large cell bees. The crisis is progressing rapidly and I have already heard of almost bee-free zones, simply because they have all collapsed.

We also have to focus on working together effectively and to distribute tasks.
This way, a beekeeper who is at suitable sites can mate selected queens and deliver them to beekeeper colleagues in genetically hopelessly contaminated areas. In return, they can receive drawn small cell honeycombs, etc. etc. This is the way we are also doing it here.

How is the beginner supposed to proceed?

As the newcomer only has to at first learn the handling of the bees, he should start out with with ordinary hives. He can rely on the help of conventional beekeepers, because if you mention our system you’ll mostly encounter denial. Foundations with 5.1 mm cell size of residue-free wax are used. He shall treat his colonies with icing sugar every 2 to 3 weeks to keep the Varroa mites within a level. The colonies can be anywhere, no matter if others are nearby, but there should be good blossom. At the same time he can then venture out to the small cells, but at a remote location, far away from large cell bees. 3 km wouldn’t be bad. And we will offer support here in the discussion group.
Also, do not forget to only work with nucs in the beginning – no big colonies.

An the more advanced?

The beekeeper who already has  all sorts of experiences with his bees should continue with his colonies just as usual – at first. He can gradually switch to the 5.1 mm cell size and use treatments with less harmful methods. He knows the areas of good nectar flow and the successful management of his bees.
Now he can look for a remote place and start with the small cells. As he is already well practiced, working with nucs is an easy task . Then he should try to expand creating more apiaries, not too far from one another, 100 meters is already enough. The work with the nucs is continued until we see that 80% of them survive on their own. Then we can dare ourselves into big colonies.
As stated, the small cell colonies in areas of poor blossom will easily build the 4.9 mm foundations and this way we can literally open a honeycomb factory. The nucs produce fully drawn honeycombs, with which we can then gradually convert the large cell colonies.
Here he will learn to handle bees that defend themselves against disease and will recognize the signs of problems.
The large cell colonies deliver clean honey which can be given the small cell ones so as they can thrive at the not so convenient locations

And what about the professional?

He lives off his bees, and therefore he needs to carry on more than ever.
In fact, everything is the same as with the advanced, only that it will go on much quicker.
Due to his skill and experience he’ll be capable of building a separate apiary way faster, which will be as far away as possible from other large celled hives. He also has enough food to feed the nucs at his disposal. He can take care of selective breeding and queen raising, because he does so anyway.
Most importantly: Do not change too many colonies at once,  it has to  go step by step, especially as HE has to apprehend learn the new management of dealing with bees without treatment. Under no circumstances should he begin immediately with large colonies, but with nucs to work until he can see how the bees do defend themselves successfully without treatment.
Migrating should essentially be avoided with small cell bees.

In any case, with small cell bees we should always rely on the experience of those beekeepers who know the most about resistance breeding. This is summarized in Erik’s study and it explains exactly how to proceed.

And here’s a summary of some tips.

These are the basic ideas – we need to discuss the details, the best place are three different forums – Beginner – Advanced – Professionals.