Varroa resistance breeding is now for us a feasible and promising way. The beekeeping system of Ed & Dee Lusby, with small cell bees, represents for us a basis which allows the bees to actively defend themselves against the Varroa mites. The additional use of selective breeding, in accordance with the experience of Harbo, gives us the opportunity to bring Varroa tolerance breeding in Europe to success what was not prosperous the last 40 years. The investigations of our small cell hives on VSH (Varroa Sensitive Hygiene) shows us the mechanisms how the bees actively defend against the Varroa. Now it is up to us in the working group to put it into reality, because we are now in the fortunate position to have all the necessary basics. We will establish a working group of resistance breeding in our group, and all who wish to cooperate are cordially invited to attend.

The other day I received Imkerfreund 12-2013 in my postbox. In this issue of the German bee magazine I found an interview with the scientist leading a varroa breeding project involving beekeepers. It’s a project that has made some progress.

Germany has had varroa for about 40 years. And they mostly try to breed pure Carniolan bees (carnica) and pure Buckfast with the help of isolated mating stations (and insemination). The main varroa treatment concept is the following in the south of Germany. 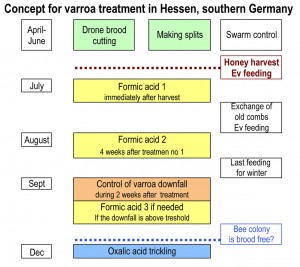 Their breeding program has two resistance parameters: pinkilling a square decimeter of brood (similar to freeze killed brood) and measuring the development of the varroa population during the season. Besides traits like low swarming, good temper and a honey crop. Their progress: being able to skip one of the summer treatments with Formic acid (as far as I understood the German article).

The Russian bees from the very east of Russia, the Primorski area, is one quite succesful undertaking started and developed by the USDA. A number of beekeepers have formed an association to take care of the 18 lines of these bees. They are treated much less than ordinary bees against varroa. With these bees you have to watch out for swarming.

The VSH-bees are influencing most of the other efforts of breeding resistant bees to varroa mites. These bees are a mixture of all kind of bees. Here you find most of the traditional beekeepers that don’t use any treatment against varroa mites, for example John Harbo, http://www.harbobeeco.com/breeder-queens/ , and Adam Finkelstein, http://www.vpqueenbees.com/breeding.html 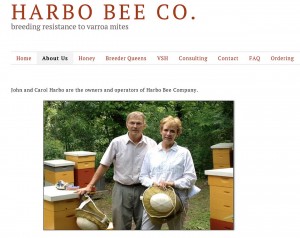 Beekeepers in different states are forming breeding organisations funded by the governement, like this one: http://mysare.sare.org/mySARE/ProjectReport.aspx?do=viewRept&pn=FNE12-737&y=2012&t=1

There are those in Europe forming good projects and those already not treating against varroa either, but with this article I want to get attention to how little progress is made with the strategy mentioned above in Germany and how great achievement is made with the VSH-breeding, focused at the start on one trait: VSH. Then on the other. Something has to be learnt here.

Actually resistant bees were achieved already after very few years, by Harbo and Harris in 1995-98 in USA. They started with survivor colonies of any type of bee they were given. The only one parameter they focused on first was VSH: Varroa Sensitive Hygiene. See other articles here in the VSH category. This development of resistant bees have to be done in all kind of regions differing in climatic and other local characteristics, mites and pathogens for example.

It’s time for Europe to learn the lesson and form breeding projects together with beekeepers where ’central’ areas are formed fairly isolated from other bees. All bee colonies in these ’small starter’ areas are part of the program. An effective way of using funding money from European Union would be to support such projects.

a response from our colleague Rüdiger:

As a German I have of course to answer to Eriks contribution “Breeding for Varroa resistance: Germany versus USA”…:-).
When commenting about activities in the varroa resistance breeding area I guess it’s better to compare Europe versus US. Otherwise it would be too bad for Germany…
I think the main drawback for Europe compared to US is that a funded continuous breeding program is missing. The US seems to have at least 3 – Minnesota Hygienic Stock (MNHYG), Russian Honey Bee program (RHB) and VSH program, which all seem to have shown valuable outcomes. Moreover, the organic beekeeping community in the US, e.g. Ed and Dee Lusby, Michael Bush, Dennis Murrel and others have been innovative and could establish treatment free beekeeping since many years. And this could be achieved with local bee races or no complicated bee breeding scheme!!! Their impact with small cells, comb distance, not contaminated bee wax etc. is not only logic and inspiring, it works as stated above.
Europe did of course some funded scientific investigation of Varroa and could contribute to the understanding of infestation mechanism in the 90-ies, e.g. grooming behaviour (Bienefeld, Aumeier, Thakur etc.) or VSH (Rosenkranz, Vandame). However, efforts seem to be sporadic and as already mentioned not continuous, to yield in resistant queens that are distributed via the beekeeping community.
Besides, beekeeping organizations here I can only comment on Germany with the AgT (Arbeitsgemeinsschaft für Toleranzforschung) http://www.toleranzzucht.de/en/breeding-programme/, try to connect and coordinate different breeders in order to achieve bees that combine favourable and varroa resistant traits. However, improvement ratios seem to be small up to now.
But in my eyes Europe could contribute significantly by activities of bee breeders. The idea to use already varroa resistant bees for breeding was first established by Erik Österlund (1989) and John Keyfuss (1993), who cross African bees into A.mellifera mellifera/Buckfast. John uses a Tunisian bee (Apis mellifera intermissa) and Erik Apis mellifera monticola from Kenya. The resulting Elgon bee is since a bee that needs less or even no varroa treatment. The same is true for Keyfuss bees and he gain merits by bringing this topic into broad public interest with his “World varroa challenge”.
This approach was copied by Rinderer (RHB), who used Russian bees that lived since 200-250 years with varroa mites and hence, should have developed resistance traits. The same idea was practically followed by P. Jungels (Buckfast – Primorski mixes) and J. Koller (pure Primorski) (Primorski synonyme for russian bees) in Europe, who contributed significantly by providing varroatolerant queens to the European bee keepers.
A guy that use local (carnelian) bees for his breeding program is Alois Wallner from Austria http://www.voralpenhonig.at/, who bred since 1990 for bees that groom and kill varroa mites by removing their legs. The result is now a bee that kill nearly every mite (varroa killer factor 100). Additionally his bees express VSH behaviour and hence, bees need only few or no treatment with formic acid.
In my opinion one brave European guy need to be mentioned as well which is Juhani Lunden in Finland http://www.saunalahti.fi/lunden/varroakertomus.htm He managed in a brute force approach to breed varroaresistant bees, which are not treated since 2009. He used a strong selective pressure to achieve his goal and hence, other traits as gentleness or honey crop might be compromised.
So taken together, these efforts need to put on a strong base in Europe as well and both, the spread of “resistant genes” by suitable queens and by suitable programs need to be pushed and furthermore the usage of organic beekeeping principles that result in treatment free bees should be distributed. That includes the courage of not using treatments to outselect non optimal strains. Here the community in Europe is already on the way see http://resistantbees.com/ (Germany and Spain), but Europe should definitely speed up and learn the positives from the US. This is especially true for the scientific sector and funded EC programs.