The Way Back to Biological Beekeeping, Part 4

From very early times, the comb built by honeybees has been studied and admired as a solution, to the problem of combining light weight and great strength, to be duplicated in the building of structures. The first known research on the structure on honeycomb dealt with the hexagonal form of the cells by Zenodorus, of Sicily. This was done in the 2nd century B.C., right after the time of Archimedes. Zenodorus 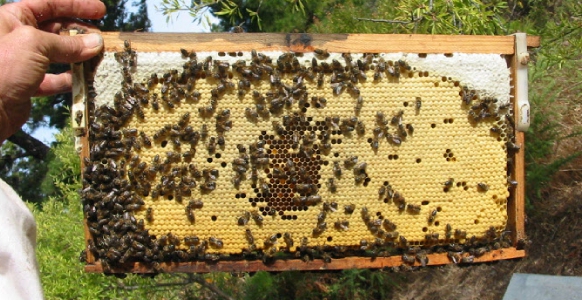 proved back then that, of the three regular figures that will completely fill a plane surface (namely, the equilateral triangle, the square, and the regular hexagon), the hexagon has the greatest content for a given circumference.

Pappus later, around A.D. 500 copying from Zenodorus, also found that bees wisely choose the hexagon form for the cell-mouth which they suspect will contain and hold the most honey for the same expenditure of wax in its construction. He was the first one to put forth the suggestion that honeybees economize wax, a notion believed for many years, though in today’s world now known to be far removed from the realities of the matter. After Pappus there was no known study of honeycomb construction until a person by the name of Kepler, an astronomer in 1611, published a very good cell description. He was credited with being the first to notice the rhombs at the base of individual cell construction.

In the 1700s there was a terrible misunderstanding/calculation concerning the measurement of the angles of the rhombuses in the pyramidal bottoms of comb cells. It started in 1712 and continued for several years during the century.

To wit: An Italian, Maraldi, an astronomer, studied bee cells and measured the bottoms of the cells and found them to be approximately equal to one another. He then calculated that, if these angles really were equal, they must each be of about 109 degree 28′. Anne D. Betts in an article in July 1921 related the story further this way, Maraldi is an “awful warning” to us all to express ourselves quite clearly, so as to avoid all danger of being misunderstood. By using somewhat involved phraseology, he succeeded in conveying to the French naturalist Reaumur (some years later) the idea that he had found this value of 109 deg.28′ by measurement! A feat which, as several writers have since remarked, was impossible with the instruments then in existence, even if the cells were regular, which they are not.

Reaumur suspected that the bees economized wax, so asked a mathematical friend, Koenig, to work out the “problem of the bee’s cell” above referred to. Koenig did so and gave the larger angle of the rhombs as 109 deg. 26′. Later investigations showed that 109 deg. 28′ was the correct answer (to the nearest minute and that Koenig had made a slip in his arithmetic).

Kent L. Pellett in an article in June 1929 added more information to the story when he wrote, “Reaumur marveled that their economy came so close to perfection.” But other scientists were troubled that the bees came so close to the correct angles and yet missed them. They took the trouble to solve the problem for themselves, with the same result as that of Koenig. But the bees refused to correct their error, slight as it was, and continued to construct the cell bottoms with the old angles.

In later years there was a shipwreck. Investigation of the accident showed that the captain had steered off his course due to calculation from logarithm tables that were defective. The tables were corrected to prevent further error. Then it was discovered that these were the same tables from which Koenig had made his calculations. The cell bottom problem was again solved, with the corrected tables, and this time the same angles were obtained that the bees had always used. The end effect was that the bees were right and the mathematician wrong.

The first artificial comb foundation was made in Germany in 1842 by Gottlieb Kretchmer. It was made by a pair of engraved rollers, and starch was used to prevent the wax from adhering to the rollers. The device consisted of a strip of tracing linen, coated with a composition of white wax and starch, and upon which the comb-foundation or base of the cells were impressed, by passing it through a pair of engraved rollers.

From there others followed, namely Jean Mehring (Dutch). In 1857 he used pure wax cast between metal molds, and A.I.Root (USA) in 1876 first used a metal roller press. Otto Schenk in 1872 produced and showed foundation with projecting starters for the side walls and John Long (USA) in 1874 produced a similar product. D.S. Given (USA) about 1879-1881, produced wired foundation made in a press, but it was not until 1892 that E.B. Weed (USA) produced sheet wax in long lengths for use between rollers. All this advancement in the making of artificial comb foundation set the stage for our present century’s achievements in technology relative to modern beekeeping, as well as, all of today’s pressing problems of parasitic mites and their associated secondary diseases.

I would say our present era of problems began around 1891 in Belgium with the introduction of artificial comb foundation with 920 cells to the square decimeter which would equate to about midway between 4.6 cm and 4.7cm for 10 worker cells. The beekeepers there all adopted this size of cell. The experts of that time believed that it was advantageous to produce as many bees as possible on the least possible surface of comb. Thus there was said to be a premature narrowing of the cells throughout Belgium, and at the end of a few years the bees were miserable specimens. (We could say that this was then the opposite of today’s problem of bigger is better.)

It was then that to combat so harmful a tendency that an idea was born with a proposed magnificent final (which we are still playing out today). A Prof U. Baudoux of Belgium published an article in Progress Apicole in June, 1893, advocating the use of larger comb cells, as a result of experiments duly described. It seems Prof Baudoux wanted to rear bees of extraordinary vigor, able to forage over a more extended flight-radius and to visit a multitude of flowers the nectar of which was, then (and probably still is), out-of-reach of their tongues.

He experimented with cells up to the limit of 750 cells per square decimeter, the sizes of cells which he obtained by stretching wax comb foundation. Then encouraged by his experiences, he wished to do still better—”TO GO TO THE BOUNDS OF POSSIBILITY”. (Here is where our current modern-day problems begin with parasitic mites and their secondary diseases.)

Prof Baudoux was so successful with his writing and his experiments, and so convincing , that manufacturing houses all started selling foundation with enlarged cells and claiming good results for the use of the same. Most of this work was done around the late 1920s through the 1930s and 1940s. (The result has been that this process of bigger is better with its resultant selling has never stopped, and continues up to modern day to the detriment now, that only enlarged oversized foundations (well beyond the bounds of possibility for bigger honeybees as envisioned by Prof Baudoux) are now only sold and standardized large at that, i.e. 5.7cm for 10 worker cells being about the largest).

Could this continuing trend towards bigger is better be an underlying causative effect creating todays problems of parasitic mites and their accompanying secondary diseases? Probably. But on what evidence would one place such a thought?

Unfortunately for us all, it was not the large cell in itself for which Prof Baudaoux was working, but rather instead for the selection of a better bee. IT IS IMPORTANT FOR TODAY’S BEEKEEPERS TO REMEMBER THE TIME FRAME HERE, AND ITS PLACE IN HISTORY, AND ALSO THE FACT THAT THE MEASUREMENT SYSTEM DEVISED BY PROF BAUDOUX WAS NOT CORRELATED WITH TRADITIONAL MEASUREMENT METHODS. WHY? BECAUSE, AN UNDERLYING CAUSATIVE EFFECT FOR TODAY’S PARASITIC MITE PROBLEMS AND THEIR ACCOMPANYING SECONDARY DISEASES WAS BORN HERE!

Equally unfortunate for us all is the fact that Prof Baudoux was a follower of what is called Lamarckian Theory, and believed that it was possible to improve the honeybee permanently, by giving her the chance to grow larger in each succeeding generation. However, to a follower of Darwinian or Mendelian theory, this is indeed a very uncertain doctrine; and the bees themselves appear to confirm this criticism (even today any beekeeper can compare the feral to those bees confined domestically), since even back in the early 1900s it was common knowledge that they tend to retrogress in the size of the worker comb cells they build when let alone, back to what is NATURAL as put forth by the laws of Nature and not by man’s artificially created and politicized rules.