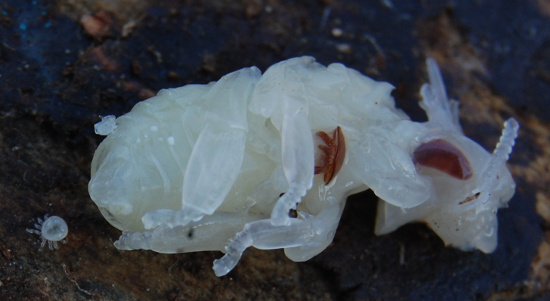 From parasitic flies to numerous viruses, honeybee colonies across the globe have a lot of things threatening their survival, but perhaps no stressor is as disastrous as varroa destructor mites. The tiny vampiric arachnids latch onto bees of all stages of life and suck their „blood.“ Often in the process, the mites deliver to the bees deformed wing virus — which causes wing disfigurements in developing pupae, resulting in flightless bees that die shortly after their emergence. Both these mites and the deformed wing virus have been implicated in colony collapse disorder, and together they can wipe out an entire honeybee colony within a few years if left untreated, scientists have found.

The most successful weapon against these mites (at least those that haven’t developed a resistance) has been pesticides called acaricides. However, scientists know little about the chemicals‘ effects on honeybee viruses. To find out, Joachim de Miranda, a bee ecologist at the Swedish University of Agriculture Sciences in Uppsala, Sweden, and his colleagues studied the effects of the common acaricide Apistanon levels of several viruses in honeybees.

To their surprise, they found that concentrations of deformed wing virus in treated bee colonies initially increased for a period, before ultimately dropping when more mites died (though the virus levels didn’t fall below those seen in untreated colonies until the last week of the six-week treatment used in the study).

If future studies conclusively show that Apistan causes a spike in the virulence of deformed wing virus, the findings could have implications for beekeepers, the researchers say.

„Make sure that you know that you absolutely have to treat before treating with acaricides,“ de Miranda told LiveScience. „If you don’t have a lot of mites, then this treatment will only cause you more damage.“

Of mites and viruses
During the winter, honeybees do not hibernate, but instead cling tightly together on the combs in the hive to form insulating „clusters.“ While in the cluster, the bees still rear young and consume food, but all reproduction is stopped. Because the bees need a critical number of members to effectively block out the cold, the colony must be healthy before and during the chilly season

„They have to be as healthy as possible going into the winter to survive and produce the next generation during the spring before dying off,“ de Miranda explained.

Previous studies showed that colonies that were effectively mite-free were still dying over winter, and bees that died had elevated levels of deformed wing virus, said Stephen Martin, a varroa mite expert at the University of Sheffield in the United Kingdom, who was not involved in the current research. „What we suspect is that the virus has now changed — it was initially reliant on varroa, but now virulent forms don’t rely on that kind of transmission,“ Martin said, referring to the fact that over the winters, when the mites are dead, the virus can still be transmitted to other bees through their regurgitated food.

In light of this fact, beekeepers need to know how soon before winter they need to start treating their colonies for varroa mites, to ensure that the bees make it to spring.

A balance of evils
The researchers don’t yet know what could have caused the initial spike they saw in deformed wing virus in the pesticide-treated bees, but suspect that Apistan could be working synergistically with the virus against the bees; alternatively, the chemical may be negatively affecting bee immunity, leaving them more vulnerable to the deformed wing virus.

Whatever the case, the study doesn’t conclusively show that Apistan had an effect on virus levels, and the results could just be a statistical anomaly, Martin told LiveScience. The researchers are now looking to test how Apistan affects virus levels in the absence of varroa mites.

De Miranda doesn’t think beekeepers should be alarmed, because the virus spike wasn’t significant enough to cause major damage, though using pesticide to treat bees with just low levels of the mites may not be the best idea. Colonies highly infested with mites need to be treated, he said, adding that „you have to see it as sort of a balance of different evils.“

At the very least, the study shows that beekeepers should probably treat their colonies for more than six weeks ahead of chilly weather, because there were still substantial levels of deformed wing virus at the end of the study treatment.

„Beekeepers need to be aware that viruses don’t sit still and things are continually changing,“ Martin said. Fifteen years ago acaricides that killed mites also reduced virus levels, but this is clearly not happening anymore, he said. „Things are not as straightforward as we once believed.“

The study was published in the January issue of the journal Applied and Environmental Microbiology.